Last weekend I met some amazing people down at “The Grid: Games and Growlers”, at their board game night but what I didn’t expect was to encounter a wild and untamed game. My eyes locked onto the unfamiliar box buried among the vast table of board games and I scooped it up wondering how many people had passed by this little gem. I then rolled up my sleeves dove into my first 5 Minute Dungeon. 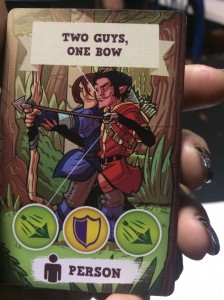 Game play was incredibly simple to learn. You basically run through your deck of cards and try to match symbols with other players to defeat the fantastically creative bosses like the “Two Guys, One Bow” but you have to be careful not to run out of cards or else your 5 minute dungeon crawl would become a story of epic failure. However, that’s not the only threat in the game, this dungeon adventure runs on real time and your 5 minutes monster stomping will end much faster than you think. After playing my first round with a bunch of newbies and one veteran, we beat the easiest boss with a mere 30 seconds to spare.

Those are the heart pounding basics of the game but I am also happy to report that these elements didn’t make up the entirety of the game. What I personally enjoyed was that 5 Minute Dungeon wasn’t about how fast you could chuck cards down but how you could manipulate your cards and hero power to benefit the entire team. Putting quick strategic thinking above random card tossing madness while heavily enforcing cooperative game play. Which some so-op games can fall short of. In fact, this was the first game where I, a highly aggressive gamer, went back to look at the roles contemplating which one that would better support my teammates in our next battle. Not only that but I found this style of game play works exceptionally well with cooperative play, as one player doesn’t have the time to play everyone’s turn for them. So you do have to function as a team to get those bosses knocked out.

The icing on this dungeonous cake though, was Artist Alex Diochon’s artwork on the cards. The art was not just eye catching but hilarious and it warranted a longer look at the deck of monsters because you can’t catch all the funny details while you’re playing the game. 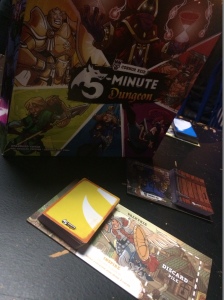 Overall this game makes a great starter game for beginner gamers or a light hearted filler game for most hard core gamers and hits my shelves as a must buy!

What I disliked about the game was that it didn’t have a ton of depth, although it makes up for that in excitement and player communication.