Originally this game wasn’t on my radar until I went into my Friendly Local Game Store and saw a demo in progress. Obviously at that point I couldn’t help stopping to play a game, to see what all the fuss was about and afterwards I did as any board game addicted parent would do. I immediately purchased the game for my “child” and continued to demo it for the next few families that came in the door. So what sold me on the game? Really everything about it. The art on the box was very cute and I saw a lot of potential in the mechanics for younger players. Mainly because everyone gets to play their turn at the same time. Which usually keeps the most distracted of players engaged.

After bringing it home to my own Player 3, she hastily threw the box top aside and began investigating the colorful pieces. A sure sign she was ready to play! Set up was a breeze and the tiles were clear and easy to explain to her. Player 3 also laughed mechanically as we would be dealing with treasure and dynamite which she thought was a spectacular combination. The only element I really focused on when setting up was the placement of the  mines.  I specifically lined them up in front of her so she could easily reach all  of them. Granted this made things a bit more difficult for the grownups but I usually stand up for this game because of my short little T-Rex arms anyway.  So it was a small adjustment for me.

We also edited the rules a bit. Removing the Minion tiles, Minion cards and Torches from the game. Now some of you might be wondering if I “broke the game” when I did this. The minions are a huge part of the game but completely unnecessary when teaching the basics of how it works. I’ve been editing game rules for Player 3 and her friends for four years now and I found that teaching the game in steps always works best for little ones.

Once they’ve learned the basics then you can always start adding in the other rules to challenge them further, however I stress you should do this only if it is needed.  As a recommendation, if your child isn’t familiar with  bluffing tactics then I would not add in the Minion elements as they have not learned the basics of this game.

For our first few rounds Player 3 did not catch on to the bluffing elements but by the end of the game we were able to  add the minions back in. She also relied heavily on the Minion Card’s pictures as she is still a beginner reader and was successful with utilizing them by memorizing a few symbols on the cards.

Now some of the games that I play with Player 3 can only be played a few times in a row before I’m ready to put that game away. With Greedy Greedy Goblins I found myself saying yes to that 6th time it was played in a row and any good game should leave you with that excitement for the next round. 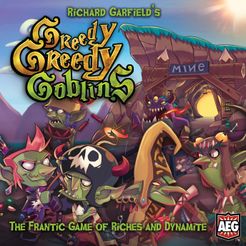 Edited Rules: We didn’t use the torch tiles because let’s be honest, this mechanic sometimes confuse adults. Also for younger players I would recommend removing the minion cards and tiles as this keeps things a bit simpler, especially when introducing the game.
Age my Child Played: 5 , and any game savvy 4 year old could play too without the torches/Minions. The biggest problem could be the children not being able to reach all the mines. So you might need to line them up in front of the kiddo and have everyone play near them. (Box Recommended Age: 14+)
Skills Required: Not putting stuff in your mouth.
Skills Acquired: Memory, beginners strategy building, beginners bluffing.
Replay Value: This game doesn’t seem to get old, for younger players or adults.
Review: This game is an excellent game for any age and for those veteran board gamers looking to introduce new players to the hobby. The game play is simple and with everyone playing at the same time, this becomes a perfect  “table time” builder. Which is an important step in your children’s board game success.

Have you had a chance to play Greedy Greedy Goblins with your child? If so, I would love to hear what age they were and if they enjoyed the game in the comments below.