At a first glance this game is winning in the theme department. Picking up the box I was thrilled to see that it was made to look like an actual pizza box and when I opened it and I became giddy upon seeing the score sheet that looked like a guest check but

to be honest I wasn’t super excited to play this game. I mean how exciting can cutting a pizza be?

Each games is played over several rounds where random slices of pizza are placed in order until a full pizza pie is created. Then the first player of the round gets to divide the pizza into shares for everyone to choose from. This one simple mechanic quickly turns into a challenging feat as players start collecting slices with points values on them. The player with the most slices of that value will get the points at the end of the game.

New York slice also has two other mechanics that help you during the game. The Pizza Specials which are abilities you can use during the game and Eating a Slice with pepperonis on it, which guarantees you endgame points. These two aspects give a lot of dynamic to the game and it insures that each session will be different. 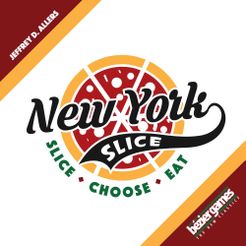 Even though I was skeptical at first, New York Pizza turned into a fantastic game for me. It had challenging concepts throughout the game and was very easy to learn. In fact this would be an excellent game to introduce to non-gamers or a great gateway game for children. For those Veteran gamers this also makes an excellent filler game as rounds can go pretty fast, once everyone knows what they’re doing.

If my review made you hungry for delicious pizza or you’re opposed to games featuring disgusting anchovies let me know in the comments below! We love hearing from you.