When touring vendor halls at any convention the first thing I’m drawn to is the art. I dabble in drawing myself, so that probably makes me a little bias and BGG Con was no different. I ended up stopping at Studio Woe’s table peering over the shoulders of the gamers playing Gruff. The vibrant colors and the Mutated Goats looked fantastic! Well as fantastic as Mutated Battle Goats made from forbidden breeding practices and dark magic can be.

That’s right, Gruff is a game about Sheppard’s who have joined the “Goat Arms Race” and used foul science with a touch of crazy to build the meanest, fattest and weirdest goats around. At this point in the introduction baaad goat puns raced through my head and I was really trying to mask my excitement as this seemed to be the perfect game for me. So we purchased the base game with the stand alone expansion and quickly ran off to the convention hall to play.

Overall this game uses the same aspects of other card and deck building games. You build a deck of “spells” and use these cards to manipulate the battlefield. So I’ll just focus on what sets it apart from other deck building games, which I feel is the tactical positioning of your Gruffs, the separate resolve phases and the slower build mechanics.

The tactical positioning wasn’t the first thing on my mind until about half way through my first game when I realized pinning down a shepherd and getting past the battle goats defenses was like two pawns trying to chase down a king in chess. With being able to resurrect a Gruff you really have to try and position your goats or force your opponent to move their goats to be able to land a good finishing blow. So this adds an extra layer to the game you might not catch during your first play though.

Another layer I really liked was the separate resolve phases. I’ve played plenty of Magic the Gathering in the past and I have to say this aspect really made a big difference for me. You were never confused about who could play a card or which card functioned over another or how it applied to other cards. It was simple, if a Shepherd decided to attack on their first round, they would play their “Spell cards” and declare their attack but the resolution wouldn’t come until the beginning of round two. Which means there’s no chaotic cards being thrown in the middle of the board, there’s no confusion on who’s attack will hit first. Instead the defender would have an entire turn to figure out how they would respond and I feel this small work around makes the game much simpler to play. It does give it more of a back and forth feel when attacking but it becomes much more of a strategic planning game, which I greatly enjoy as I am strategic gamer.

The last mechanic in this game is probably my favorite and that’s the slow build. Gruff utilizes the use of “Crazy” which powers your spells. An you can only get crazy if your Guff’s start to get real weird. Which means you’re not attacking the other Shepherd right away  and you have a little breathing room to prep the spells in your hand, adjust the battlefield, and power up your Gruffs. This little phase in the game usually takes a few rounds to play out but it makes the game so much more satisfying as you’re not being pelted by attacks or spells right out of the gate. Instead you have the chance to fall in love with your beastly Gruffs as you pump them full of Contraptions, Mutations and Biological Defenses. 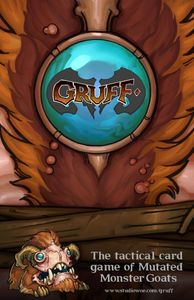 Bottom-line this is a card game for people who like deck building but don’t want to spend a day building their deck or ton of money to keep up with the quarterly” new deck” cash grab. The base game gives you 7 shepherds, 15 Gruff’s and 225 ability cards to play. and with each Shepherd you can enlist any combination of three Gruff monstrosities from any of the 5 distinct clans, so the combinations are nearly endless. Also there’s no need to purchase plastic card separators or labels as each gruff acts as his own deck separator. This tiny little detail clearly shows the designer put a lot of thought into the design, anesthetics and functionality of this game.

So if you’re sick and tired of Shepherds using “Your Bridges” whenever they please and you are willing to bend innocent goats into your sadistic mutated Gruffs then this is the game for you!