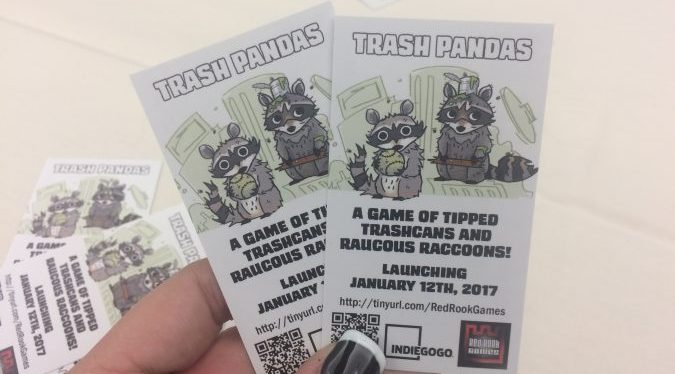 Recently I went to the Arizona Game Fair looking for trouble and low and behold I was lucky enough to find Trash Pandas! So I sat down with Darkrock Ventures designer Michael Eskue and got a firsthand look at how this game works by rummage through the cards and finding some delicious gaming goodness. 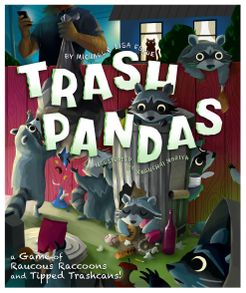 This is a card game that consists of two phases, the first being a push your luck dice game. As you roll a single dice and try not to re-roll the same symbol a second time. So with each success you’re increasing your chances to bust. Usually at this point I’m done with “press your luck”  dice games but this is only a small part of Trash Pandas. The rest of the game is centered around card manipulation, which I am a big fan of.

You can even use your cards to manipulate your dice rolls which give you more actions to use on your turn, or maybe you want to use those cards steal some trash from your friends. Either way the cards are helping you change your luck but there is a catch to this. You also want to be stashing those nanners, yum yum’s or feesh cards away for Victory Points later on in the game.  Which really makes you think about what you want to play during your turn, as you could be literally be throwing points away in the trash. 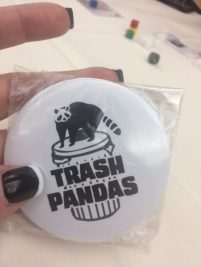 Overall I would have thrown my money at this campaign just for the name alone! At a whopping $12 to back, this seemed like a small risk but after playing the game I was sold on becoming a Trash Panda myself. It’s fantastically themed, the new art looks amazing and it plays really well.  There’s a lot of strategic concepts going on as you try to figure out what everyone is trying to stash.

Trash Pandas, is for 2-4 Players and is an easy game to pick up and learn. I would recommend it for those gamers looking for a filler game, non-gamers or those looking to get into the hobby.

If you think Trash Pandas are your spirit animal you can join the crowd funding campaign HERE and let us know in the comments if this game is going to hit your table.